Do Robins Get Along With Other Birds? (Who Scares Them?) Robins are a type of bird that is found in North America. They are brown and red or orange in chest color and have a white belly. Their beak is short and their body is rounded.

For a backyard bird, the robin is medium in size (bigger than sparrows but smaller than crows) and they mainly feed on insects and worms.

Robins are known for being quite friendly and social birds and typically live in large flocks – especially during winter.

American robins are not skittish birds but scare easily if the approaching bird is larger, although not as easily as their European counterpart – the European robin – which is quite a lot smaller than the American robin.

Both types of robins may be scared off by other similarly sized birds like the blue jay, but the interaction may also sometimes go the other way around!

They can be! The American Robin is very much average when it comes to aggressive behavior in backyard birds.

The robin is right in the middle of the spectrum (see figure later on), meaning that it is scared off by pretty much the same number of birds that it can itself scare away when competing at the bird feeder! So you might say that it is medium aggressive.

Competition has great ecological, behavioral, and conservation implications for species, and these need to be considered when predicting future impacts on these species.

However, it is important to keep in mind that a bird’s ability to win a fight does not necessarily predict its ability to survive.

This is why we do research into these behavioral patterns of birds playing out just outside your window – but with potentially great ecological consequences!

Do Robins Kill Other Birds?

While robins can be aggressive towards birds lower in the backyard bird hierarchy (see below), they do not usually kill other birds.

Male robins are, however, known for having quite violent fights with other robins. These territorial or mating-related fights can sometimes, although rarely, result in the death of one of the contestants.

But luckily, the fight is often done before it begins as one bird might already signal with its larger body or redder chest that it has the upper hand and the competitor is better off finding other grounds to hunt on mate on.

It is important to remember that a species would not be successful if all mating fights resulted in the death of one of the participants, but on the other hand, some display of strength is needed to keep the species “fit”.

Are Robins Afraid of Blue Jays (Do Blue Jays Scare Away Robins?)

Robins are generally more afraid of blue jays than blue jays are of robins.

Blue jays are another type of bird that is found in North America. Blue jays typically live in suburban backyard trees and they have a bright sky-blue color on their white bodies, which is where their name comes from.

Blue jays usually don’t form large groups, instead preferring to live alone or in pairs. They are very vocal, using their voices to communicate with each other.

Blue Jays, in contrast to robins, are quite aggressive and intelligent birds that tend to be feared by other backyard birds. They often steal eggs from bird nests and may even kill nestlings for food.

Blue jays are very loud and noisy birds, so they will often screech loudly as a warning signal to other smaller birds such as cardinals and mockingbirds for them to stay away. This is part of the reason why birds such as robins and cardinals are afraid of blue jays.

In addition, blue jays have a bad reputation for stealing from nests, so most birds, including robins, are very aware of them in their environment.

Blue jays can even scare away other larger bird species such as doves and woodpeckers.

In addition, both blue jays and robins feed on worms and insects, so if a blue jay spots a group of robins foraging for food they will scare the robins away to obtain their food.

Blue jays use their intellect to spot when other birds have found food which is why they scare away robins so that they can have all the food to themselves.

While robins are often scared away by blue jays, this is not always so as the interaction may go both ways, and robins are also seen scaring away blue jays, especially during nesting season!

What Other Birds Are Robins Afraid Of?

These birds all scare off robins because they are bigger and more aggressive, which means they can intimidate the smaller birds.

Do Robins Scare Away Any Birds?

Yes, they can actually scare away many smaller birds at your bird feeder if they want to!

Although American robins are not inherently aggressive, like the blue jays or crows, they are fairly large for a backyard bird, which does induce respect from other birds.

In fact, the American robin is just about right in the middle of the bird feeder hierarchy – able to scare away as many birds as it is scared of!

Robins scare away other smaller birds such as Baltimore Oriole, Golden-Crowned Sparrow, Downy woodpecker, Evening Grosbeak, and even the fairly aggressive Northern Cardinals!

They are able to effectively scare these birds away because they are fairly loud, can team up in pairs or groups, and are able to fluff up their feathers when they feel threatened.

Do Cardinals and Robins Get Along?

American robins can scare away small birds such as the Northern cardinal, Eastern Bluebird, and a few others. Cardinals are quite aggressive, but robins weigh almost quite as much so they have the upper hand.

Cardinals have a bright red color on their bodies and around their face. Cardinals are also very loud and vocal birds, but unlike blue jays, they stay in pairs or flocks which can be an advantage when chasing away other birds.

They tend to eat insects, grain, berries, and seeds at bird feeders. American robins scare away cardinals because cardinals like to eat the same food that robins do.

It is important to remember that most interactions between birds are peaceful – no one is interested in conflict because conflict is energetically costly and comes with the risk of injury.

Do Robins and Doves Get Along?

Mourning Doves are bigger than Robins, and for that reason alone they will sometimes scare American Robins away.

Doves are a type of bird that is found in North America and parts of South America. They have brown and gray feathers, with white spots on their wings and tails. They also have long orange or yellow beaks and large eyes.

Mourning Doves will scare robins away because they compete for the same resources, but they are not very aggressive so most of the time they get along well.

Do Robins and Bluebirds Get Along?

American Robins can scare off bluebirds because they are a bit bigger and somewhat more aggressive.

American Robins are also louder, which means they can make a lot of noise to scare the bluebirds away.

Bluebirds are small songbirds that have blue feathers on their backs and slight dark colors around their heads. They put twigs together to make nests under tree branches or in holes that other larger animals might dig.

American robins will scare away bluebirds if they try to build their nests in the same place.

Do Robins Scare Away Hummingbirds?

Hummingbirds are a type of bird that is found in North America. They are very small and have a long beak that is shaped like a tube.

They are able to fly quickly and they get their name from the sound of their wings, which make a humming noise. Hummingbirds feed mainly on nectar, and they do not usually compete with robins for food or nesting space.

Yes, owls (even fake ones!) scare away American Robins.

Owls are birds of prey, which means they hunt and eat other smaller animals for food.

They have large eyes so they can see better at night when it is harder to see, and their ears are located on the top of their head so they can hear everything around them.

An owl scarecrow may help keep small birds and other critters away from your yard.

Fake owls can be used to scare off robins for the same reason that real owls scare them off, so this is an option if you do not like to have smaller birds around your yard.

If you are interested in knowing more about how birds interact with each other at the bird feeder, check out may articles on what garden birds are afraid of crows and whether the Blue Jay or Cardinal is considered to rank highest in the bird feeder hierarchy!

Robins are able to effectively scare away other smaller birds because they are fairly vocal and make lots of noise when aggravated, especially when they feel threatened.

Robins are placed somewhere in the middle of the bird feeder hierarchy, meaning that it is very average in the ranks among other backyard birds.

Robins and blue jays tend to be aggressive towards each other and here blue jays have the upper hand. However, robins do intimidate many smaller birds.

Robins also compete with sparrows and cardinals for food, as both species eat insects and seeds.

Additionally, fake owls can successfully scare away robins, as these birds are afraid of anything that looks like a predator. 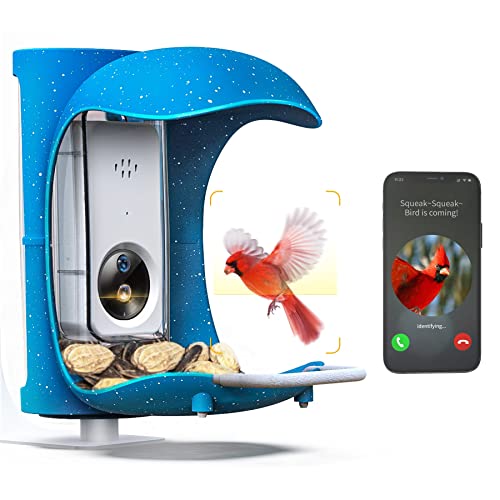